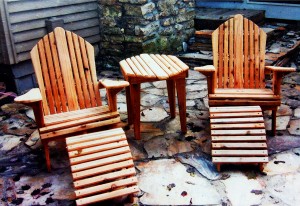 The chair is the central element in Adirondack furniture; all other pieces are based on its design. The key features of the Adirondack chair are its straight back, deep-set seat and wide armrests (wide enough to hold a plate, a book, or a beverage). Adirondack is the primary style in which the Chairman builds; however, custom styles and pieces are available.

*The first Adirondack chair was designed by Thomas Lee while vacationing in Westport, NY in 1903. Needing outdoor chairs for his summer home, he tested his early efforts on his family. After arriving at a final design for a “Westport plank chair,” he offered it to his carpenter friend Harry Bunnell, who was in need of a winter income. Bunnell saw the commercial potential of such an item being offered to Westport’s summer residents, and, without asking Lee’s permission filed for and received U.S. patent #794,777 in 1905. Bunnell manufactured hemlock plank “Westport Chairs” for the next twenty years, painted in green or medium dark brown, and individually signed by him.